It’s Alive! How Print is Thriving in a Digital Age 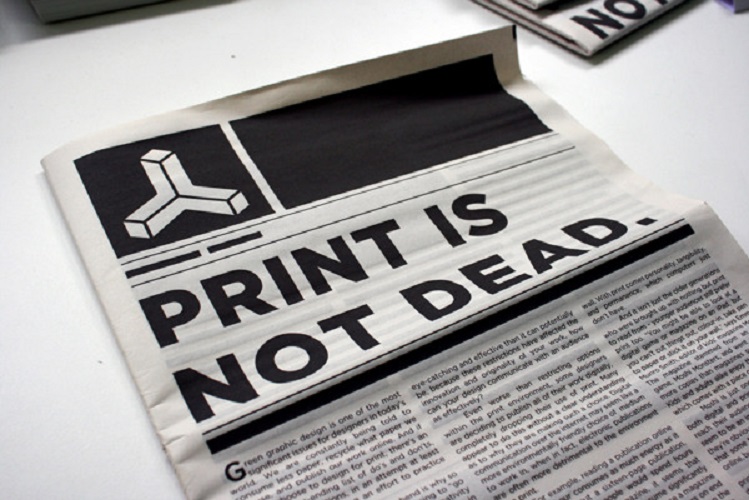 Judging by the widespread adoption of digital communication, commercial printing companies, like dinosaurs, should have been extinct by now.

Yet most are doing well, if not thriving. According to Sageworks, a financial information company featured on Forbes.com, “commercial printers are finding a way to grow sales and profits despite the shift to digital alternatives.” Their reports show that print sales increased about 4 percent: “That shows us this industry is still growing its revenue, even though the popular opinion is that this industry is dying or really struggling,” says Sageworks analyst, Jenna Weaver. A 2014 InfoTrends Report on the Production Print Services in North America attributes the growth in revenue in part due to commercial printer companies diversifying their portfolio of services.  Many companies have shifted their focus from the conventional print medium to offering services for alternative forms of printing like packaging and signs. For example, Optimist Printers have opened up their product line to include vinyl designs on signs, banners, car graphics, and t-shirts–products that go beyond what the traditional offset press offers. Matt Herriges, owner of Optimist Printers, believes that “diversity is becoming more and more important to the industry.” Though traditional print products–like brochures and catalogs–are still getting a substantial slice of the marketing pie, days of blanketing an area with direct mail are gone, making way for a more targeted approach in reaching preferred consumers. This is especially the case when it comes to the fashion industry. According to the Business of Fashion, John Koryl, president of stores and online at Neiman Marcus, says that “catalogues scratch the itch that certain customers want. We’re not going to run television commercials because we appeal to such a small set of the total US and international audience for luxury fashion. We have to work in a very targeted way. Thankfully, catalogues can still be very targeted.” Marketers now rely on various databases to customize their mailing lists, and thus no longer have to produce, say, 50,000 catalogs to reach 10,000 buyers. The magic number is probably closer to 20,000 because they know more about who the target audience is. Newspapers, like brochures and direct mail, are another source of income for some commercial printers. This segment of publishing industry has been coping with digital incursion and declining daily subscriptions, yet its products remain relevant. Consumers often skip daily newspapers and turn to free articles on Twitter and Facebook when the news is breaking. But a large number of them still enjoy a cup of coffee and a Sunday paper, according to the Nielsen Scarborough’s 2014 Newspaper Penetration Report. For example, The Orange County Register in Santa Ana. Calif., has pursued a print-first strategy and saw its average Sunday print circulation rise 24% to 333,661 last year, up from 267,121 in September 2013, according to Poynter. Magazines are also adding to the commercial printer’s bottom line: 234 new ones launched in 2014, which is up 21% from the 185 a year earlier, a report by Magazine Innovation Center at the University of Mississippi stated. The book-a-zines and annuals added 621 titles. Most are moneymakers for the publishers who can charge more for print than digital ads – a media industry standard. Commercial printers, while specialized in their craft, are an important indicator of the state of the print industry as a whole.  As our world becomes more digitized companies are forced to adapt in order to stay relevant.  And thus far, commercial printing companies have proven that they are definitely holding their own.

Disclaimer: The images on this page are not owned by InkCartridges.com and are used solely to illustrate concepts discussed in the article. Please click on the images to see their original sources.